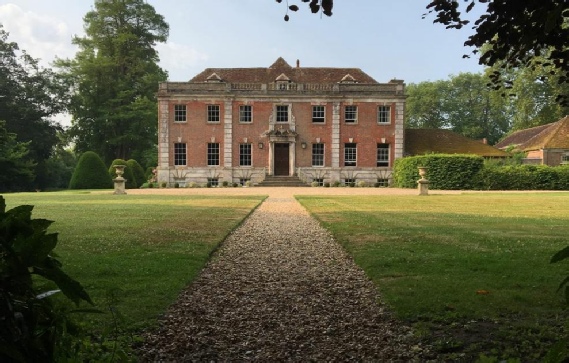 The history of Deans Court goes back to the 8th century, when a house was

built on this site for the Abbess of Wimborne.     In the middle of the 10th century the

house became the deanery for Wimborne Minster. Although it was not until the 16th

century that it became a private dwelling; when chantries were dissolved by an

Act of Parliament and in 1548 Deans Court was granted to John Hanham, MP for Poole.

Since then it has been home to successive generations of the Hanham family.

the house retained panes of Renaissance stained glass from the  earlier house.

The north and east facades are of early Georgian brick, while to the south

and west is a Victorian extension built in 1868.

The Court is listed Grade I for its historic interest.

Other Saxon features to survive includes the stewpond in the gardens.

Other notable garden features include an apiary, herb garden, plantings of mature

trees, and the walled kitchen garden enclosed within a serpentine wall said to

have been built by French Napoleonic War prisoners.

There is an apple orchard where wildflowers grow beneath the branches.