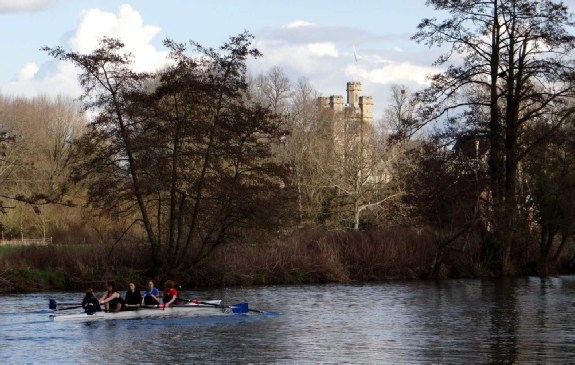 The name Canford goes back to at least Saxon times and with a probable origin being Cana’s ford – across the River Stour.  In the Domesday Book, the manor of ‘Cheneford’ was held by Edward of Salisbury. In 1198 the manor passed by marriage to William Longspee, an illegitimate son of King Henry II and half-brother to King John and Richard the Lionheart.

Whilst fighting abroad in Gascony with Richard, Longspee’s wife, Lady Ella was pusued by Reimund the nephew of wealthy and influential Hubert de Burgh

[1st Earl of Kent] and won the support of the king for her to remarry on the assumption that Longspee was dead [the wealth of the Canford estate would then be with the de Burghs]  On his return Longspee was indignant at these approaches and argued with de Burgh over his involvement and support for the match.  An invitation to a banquet followed  - immediately after the banquet Longspee was taken ill and died the following day - and was buried at once without any enquiry at Salisbury. The fact that he died suddenly, and buried so rapidly, suggests that he was possibly poisoned. In 1226 he was the first person to be buried in Salisbury Cathedral.

His tomb was opened in 1791 and the well preserved corpse of a Black Rat, apparently containing traces of arsenic, was found inside his skull.  The rat now forms one of the more bizarre exhibits in Salisbury Museum. Longspee was an important historical figure, having witnessed the signing of Magna Carta. His son, William Longspee the second, has a significant place in local history, granting rights to the emerging town of Poole by the Longspee Charter of 1248. The charter confirmed the long standing right (‘as always they have been accustomed’) of local people to graze cattle ‘in my heaths’. The charter was a means of financing the Crusades and Longspee was subsequently killed fighting in Egypt.

Subsequently in 1845, venture capitalist Josiah John Guest ( South Wales - Ironwork owner)  purchased the Canford estate for £335,000,(£40m+ today) Charlotte, his wife, immediately taking upon herself the mammoth work of re-organisation. The great architect Sir Charles Barry, who a decade before had designed the new Palace of Westminster, was commissioned to re-style Canford Manor as a Gothic mansion – an undertaking that took several years to complete.

In 1874 the  17,000-acre Canford Estate (Home of Lord Wimborne)  was one of the largest in Dorset. It has since shrunk to around a tenth of its former size.