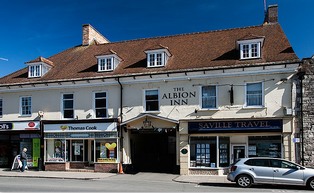 The “1777” -  formerly “The Albion” – formerly a more extensive coaching house called “The New Inn” has been witness to many historic moments.  In the 18th Century before roads were a significant network; there being little travel outside of one’s own local community, Turnpike Trusts met to plan and provide basic roads that could improve travel. One such meeting took place in the New Inn on the 1st June 1756 to discuss roads to Cranborne and to Ringwood amongst other places and in the years that followed  parishioners of Wimborne were each obligated to provide six days a year on which they would provide the labour

Coaching Inns were also the meeting place for joining and leaving coaches and the New Inn was a stopping place for the Exeter to Southampton coach which by 1830 had extended its destination  services to Plymouth and Portsmouth – and in 1834 it carried the six ‘Tolpuddle Martyrs’ on their way from the county jail to serve their seven year sentences in Australia.

The main coaching houses were the Kings Head, the Crown, the Kings Arms and the New Inn – other Wimborne entrepreneurs ran coaches and wagons from the Rising Sun and other

places in the town.

Robert Higden left the New Inn to his son. The New Inn was originally much more extensive

encompassing properties adjacent to the currently smaller and renamed ‘Albion’.

Grand dinners were also hosted there such as the one in 1789 for fifty guests and chaired by William Hanham, a great civic meeting to celebrate the recovery from illness of George lll

One hundred and fifty later in 1838 the funeral cortege of Lord Eldon, then the Lord Chancellor, stayed there overnight on its way from London to Encombe Park in Purbeck and in 1842 the rooms were used as classrooms whilst the Grammar School was being rebuilt.